Languages are different methods of speech used by characters and NPCs on Arelith. The default language for most humanoids is Common, but other languages are represented with the Language System on Arelith. This changes text into a garbled version for characters who do not know the language being spoken.

To use any language that your character has access to, simply type the corresponding command before speaking the language. To return to Common, simply type "--". Console command -language shows player all the languages available to their current character.

When putting an emote or speech on quick slot, don't forget to put /tk before it. More details are listed in article about communication in game.

When character speaks in a different language, player can surround parts of text with square brackets to speak those parts in common. Example: -el This is elven [and this is common].

Even when speaking a non-common language, anything written between star characters or double colons (i.e. *emotes* or ::emotes::) come out untranslated. The same is true for anything written in square brackets "[ ]", though the brackets are themselves not printed. So, for example, typing in Celestial "I pray.. *sighs heavily* the heavens will end the corruption in [Cordor] soon", prints "I qnaz. *sighs heavily* yrel relajelcl find elct yrel vunnoquiuc ic Cordor luuc." This allows third parties to pick out place names, or anything else that your PC speaks directly in common. It is also possible to write an emote between double brackets (i.e. [[emotes]]) will come out untranslated and surrounded in single brackets, making it possible to easily use that emote style.

There are three commands to change the way the chat is relayed, most of it related to the languages. Mind that "untranslated" refers to the raw text, regardless whether the character can translate the language or not.

Characters can speak any language given to them by their subrace or class, as well as any languages learned through other methods (see below). These are the only ways to speak languages.

Understanding languages that you can't speak is possible through several different methods. If your character has made progress learning a language (see below), you will understand lines of that language at a frequency corresponding to your current progress.

Lore contributes to language understanding, effectively giving a 1% chance of understanding any given utterance for every 2 Lore points, capping at 25% + monk levels + bard levels + harper levels.

Language recognition scales at a rate of 10% per 2 Lore points, capping at 100%.

A few notes regarding this:

Characters can learn to speak and understand new languages in one of two ways:

Rolls to learn a language are hidden. A plethora of little mechanical or semi-random factors exist, but they are meant to remain secret. Please note: this is not a quick process.

If you fully learn the limit of languages than what your intelligence score and bonuses can support, language learning will stop.

Natural ability bonus is gained on character creation, by increasing ability on leveling up or from epic feats. It is not counting effects that temporary increase or decrease this number (such as temporary spell effects or bonuses from items).

Soft intelligence helps to learn languages faster. As with understanding languages, Fox's Intelligence is your friend.

Phrasebooks allow characters to learn new languages. Phrasebook will still work with weight reduction, changed name or changed description. They work even when character is polymorphed/wildshaped. They do not disappear after their purpose has been fulfilled.

Progress is saved in the character, not the phrasebook. This means that if you lose, sell or gift the phrasebook, you can acquire a new one at a later date and continue progressing through the language where you left it.

You can check your progress through the languages using the -language command. While you can't tell the exact progress, you can see a rough indicator measured in Unknown, Beginner, Intermediate, Advanced, Fluent, where Fluent represents a completely learnt language.

The system supports learning Animal language, Drow Sign Language, Roushoum and Thieves cant through phrasebooks, but the books themselves are not available in game making them impossible to learn through this method. They will still be granted automatically with the proper race or class.

You can now read and write in languages using Writing Paper.

- The interface for note writing now has a new option, [Toggle Preview]. Choosing this option will switch the in-progress text you see in the dialogue window between the encoded input (the text with the tags) and a preview of the resulting output, complete with colorized language labels. - You can now customize the Name of your note; Names are no longer required to be the same as the note's Title. Note Names always display in Common due to game limitations.

Details: Writing in languages is accomplished by adding language syntax to the text in your note. This language syntax is fairly simple. Here are some terms that will help you understand it:

If you don't want to bother with writing this syntax yourself, you can simply use Writing Paper as normal and the appropriate language tags will be applied automatically for you based on the language you are currently speaking.

- Your reading comprehension depends on your fluency in the language you are reading. You will understand more and more words as your fluency increases.

- You additionally receive a reading comprehension bonus based on the following factors:

(Be advised that all of the above may be subject to tweaking/adjustments.)

- You must be able to fully comprehend all languages within a particular note in order to read it aloud to others. When you do read a note aloud, you read it aloud in Common for all to understand (for now).

Details & How-To: Item descriptions now recognize two new syntax markers, [inscribe] and [/inscribe]. Any text between these two markers is interpreted in the exact same way that note language syntax is interpreted and is also subject to the same restrictions (e.g., you cannot inscribe in non-written languages, nor can you inscribe in languages you cannot speak).

Additionally, the interface for editing an item's description in the Dweomercraft Basin/Workstation has a new option, "[Inscribe item]." Choosing this option will put you into "inscribing mode" and apply all the appropriate tags for you automatically; all you need to do is choose the language you are currently speaking and append text using the interface. Players will find this to be a similar experience to writing a note. If you use [Set text from pin] you will have to write the syntax manually.

Choose [Preview description] at any time to see a preview of the item's description (this feature was broken; it is fixed now.)

See the screenshot below for an example: 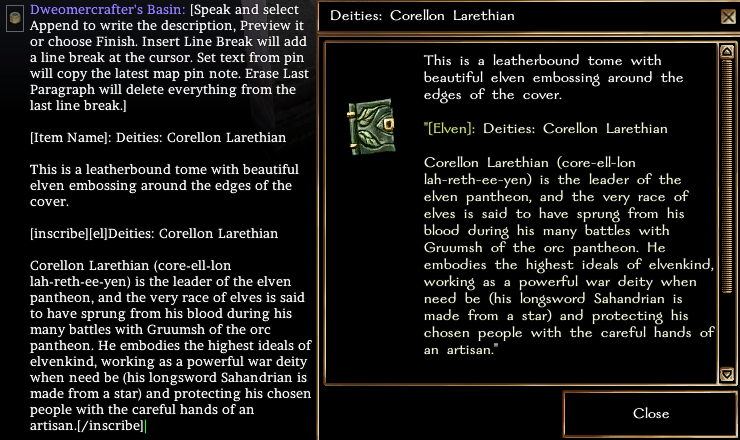