Outcasts are only able to get citizenship in Andunor districts.

Characters become members of settlements by becoming citizens. This registers the character as a resident and gives additional options with local NPCs. To become a citizen, find the Registrar NPC in town. Their titles vary per settlement but they are usually located in the town hall or similar structure. This registration costs 10,000 gold and expires if the character does not log in for 13 in-game months or around 37 real-life days.

Most surface and underdark settlements function in this way, but Andunor is large enough that individual districts are considered separate settlements. The Sharps, Greyport and Devil's Table districts have their own settlement systems open to players.

All districts and settlements have some kind of NPC oversight, though the primary focus, rules, and decisions are in the hands of the players elected and empowered by those chosen leaders.

Any citizen may run for leadership of the settlement in an election if they have been a citizen for at least one year prior to running. To challenge the current leadership speak with the Registrar NPC. If the last election was more than 1 in-game quarter (28 RL days) ago then another election can be called. Once begun an election runs for two in-game weeks or exactly 4 real-life days and 16 hours. Citizens may vote by speaking to the Registrar or may even join the election themselves as an additional candidate. Characters can also register for elections early, putting their name in the next election whenever it is called.

When an election is active, all citizens will be notified in the combat log upon login.

Various settlements can handle leadership differently using player made systems (via Roleplay). Some are ruled by a mayor, a king or even a council. Regardless these positions are elected through this same election system. It should be stated, though, that only player citizens get a vote in these elections. The NPC residents and merchants get no say. Also, there is no reason elections need to be fair. It is possible to use bribes, intimidation or even assassination to defeat opponents in elections. Although they systems are not controlled mechanically by the game engine nor by the DM team, if they overstep into the bounds of the NPC power structure or violate the rules in some capacity the DM Team may step in and work with the leadership team to correct any issues.

Each character may vote only once, and it is against rules to vote for your own character on another of your characters. It is also against the ruls to vote with characters who have not been active in roleplay in the settlement prior to the election. A warning is displayed with the registration NPC. And those who violate this rule can see their ability to both run for election or vote in elections suspended by the DM Team.

If a character changes citizenship from another settlement, they are not allowed to vote in elections for one in-game year.

In Character Interference Harpers and Assassins have additional ways to interact with settlement elections.

Out of Character Interference

Elections are an important part of the in-game social experience. Out of character (OOC) interference of an Election process can result in a punishment. This includes, but is not limited to, using out-of-game methods to coordinate voting activity..

Settlements can collect income by charging taxes on services. This includes the purchase price when buying a quarter or shop in a settlement, and the registration fee for new citizens. Leaders can also charge a percentage tax on items sold in player owned shops. By default this is 10%, meaning 10% of every sale goes to the settlement's account. The rate may be altered by settlement leaders by speaking to the Registrar.

Any community leader can withdraw or deposit funds in the settlement account. If the balance reaches zero then salaries (if any) will stop being paid, the exile list will be cleared (see below) and the current leaders are removed from office.

Settlements have quarterly requirements of resources and so maintain supplies. The settlement Quartermaster NPC lets citizens and leaders interact with these things. Quarterly required items include food, wood, cloth, metal, and stone and how much is needed depends on the number of registered citizens and exiles. Larger settlements will need substantially more resources each year. Settlements that fall below these requirements will suffer reduced tax income and salaries. All trade is managed by the community leader(s). They can arrange contracts with dockmaster NPCs which will import goods from the wider world at cost. Contracts with legitimate nations will have a lower cost than 'pirate' Contracts.

If the balance of any of the base resources (cloth/stone/food/etc.) reaches zero a 1% tax will be added to all owned homes and sales tax. This tax is 1% per resource type defaulted on, per budget quarter, and it compounds (default on two resources for two years in a row and the tax will be 4%). The extra tax is not collected by the city nor added to the settlement’s treasury. Ending a budget quarter with a balance above zero on the defaulted resource will remove the tax penalty for that resource.

Settlements also maintain supplies of general items. These extra supplies are referred to as the Expanded Warehouse and can be bought and sold by speaking to the Quartermaster. Unlike other NPC stores, however, the supplies are not unlimited. Once the items sold to the Quartermaster run out, they can no longer be purchased. Prices can be adjusted by settlement leaders to encourage trade in specific items.

If the amount currently stored falls short of the amount needed to pay the quarterly maintenance cost, the settlement will automatically attempt to buy from the surplus generated by other settlements. The cost to import resources from elsewhere will be very high. Settlements can only buy from settlements that have a trade agreement in place with them.

There is a safeguard in place that helps prevent people from buying out a settlement's resource below its quarterly resource needs (This is to help prevent others from quietly sabotaging settlements without any RP/Counterplay).

Once elected, leaders can create divisions and appoint characters to work for the government. These employees can be given salaries and be delegated powers and privileges. Speaking with the Registrar allows leaders these options. Most any combination of titles and groups can be created and edited using these systems.

Other specific actions can be taken by settlement leaders, or characters appointed to these powers by the leader. A writ gives these powers to characters and are required to make these actions. Writs can also be given to whole divisions of employees. Available actions include:

A settlement has the ability to provide citizens with storage space within settlement banks. All settlements will provide each of their citizens with a minimum of 3 slots to store items inside. The size of an object does not matter. Settlement leaders can spend resources (paid every quarter IG year) to expand the storage space for their settlements up to a total capacity of 12. The amounts and costs are listed below.

Settlement leaders can also restrict storage space to individuals based on their race. For example, if Cordor restricted their bank storage to only be used by humans up to 9 slots, and only human nobles could access up to 12 slots. Then all other races could only access 3 slots total.

If settlement leaders decide to revoke or reduce storage, items will still be stored but new items cannot be added. If citizenship is lost due to inactivity, you can purchase it again and all your items will remain safe.

A settlement can pay 5,000 stone each quarter to maintain clean drinking water within its city. A small price to pay for a healthy population.

A settlement may choose to ensure their population is health by giving out free food. This will be seen in the battle log as a net gain to food by those citizens in the within settlements boundaries. “How there is no such thing as a free meal” and the settlement must pay a cost in food resources each quarter to offer this service. The calculation for this cost is:

Settlement Leaders can also grant loyal citizens or stanch supporters the status of Landed Nobility. Those granted Noble rights, not by birth but by deed. Often used as a way to reward a settlement leader’s strongest supporters or those citizens viewed as valued members of the community.

Settlement leaders can now declare a person a Pariah within their settlement. This replaces the former option of Revoking Citizenship. This REQUIRES prior RP with the would be target person to person, else it is considered a rulebreak.

Pariahs can use leadership/intimidate/disguise (DC: 40) bypass the restrictions for all but settlement storage.

Note: If the character signed up in advance to run for leadership, being exiled (or Pariah'd) will not cancel the registration and they can still win the election.

Settlements have a maximum amount of exiles. This rate is 3 exiles plus 1 for every 10 citizens (or for every 20 citizens for Cordor).

Tips from Irongron on being exiled: 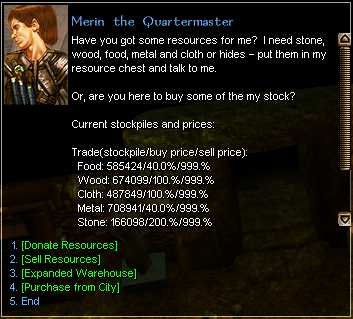 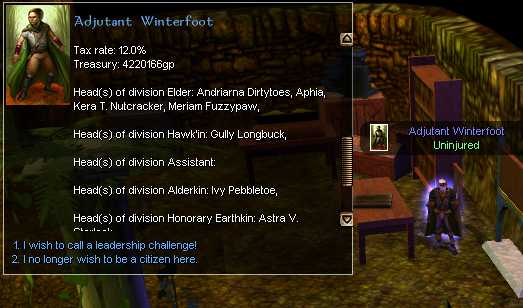