Prince of Lies, the Dark Sun, the Black Sun 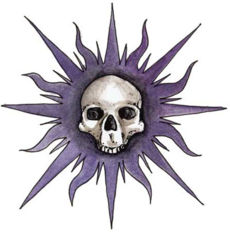 Cyric (seer-ick) is a petty, self-centered, megalomaniacal deity who holds himself above all other deities. He has an immense following throughout Faerûn: The unholy radiance of the Dark Sun draws power-hungry mortals like moths to a flame and then inexorably consumes them. Cyric was once insane, but his bout with divine madness has finally ebbed, and he no longer believes himself more powerful than all other deities. The Prince of Lies delights in spinning webs of deception that lead both mortals and deities to their ruin and pit friends and lovers against one another. He has assumed many guises since his ascension: a bloody wraith, a cloud of poisonous smoke, or a sudden gloom containing the phantom images of whirling human skulls and the intent gaze of two black eyes. However, his true form is believed to be that of a slim man with blazing dark eyes and chalk-white skin.

Cyric's clerics pray for spells at night, after moonrise, when the Dark Sun's radiance is at its height. Cyric's church has few holy days and does not even celebrate the date of the deity's ascension, for to do so would also honor Mystra ("the Harlot," to Cyric's worshipers) and imply that Cyric has not held the mantle of divinity for all eternity. However, whenever a temple acquires something or someone important enough to sacrifice to Cyric, its high cleric declares a Day of the Dark Sun to signify the holiness of the event. Eclipses are always considered holy, and are often celebrated by feasts, fervent prayers, and the murder of a high-ranking cleric or paladin of Lathander. Cyric's clerics often multi-class as assassins, blackguards, illusionists, rogues, or strifeleaders.

History and Relations with other deities

Once mortal, Cyric was elevated to divine status by Ao at the conclusion of the Time of Troubles in 1358 DR, as was Midnight (Mystra). Upon his ascension, Cyric claimed the portfolios of Bane, Myrkul, and Bhaal, largely subsuming their churches into his faith as well. The Dark Sun then slew Leira, Lady of the Mists, with the aid of Mask in the form of the sword "Godsbane." A decade later, in 1368 DR, Cyric created the Cyrinishad, a tome of great power that proclaimed him the One True Deity. Cyric unwisely read his own book, a mistake that cost him his sanity and led to the loss of Myrkul's former portfolio to Kelemvor, a mortal with whom Cyric had once adventured. Moreover, Oghma and Mask conspired to create another tome entitled "The True Life of Cyric", and with it the Dark Sun's plot was foiled -- although not before the destruction of much of Zhentil Keep. However, caught in the web of his own plots, Mask read the Cyrinishad as well, enabling Cyric to steal the portfolio of intrigue from him, along with some of the divine power of the Master of All Thieves.

A year later, in 1369 DR, Cyric was accused of innocence by reason of insanity, thereby failing in his divine duty to spread strife and discord. Cyric's Chosen, a former Calishite merchant name Malik, arranged for his patron to read "The True Life of Cyric" and thus regain his sanity. A tribunal of greater deities then found the Dark Sun guilty of his crimes and allowed him to keep his divine status.

Now Cyric continues his murderous intrigues with renewed fervor, ever striving to undermine his fellow deities and destroy all that they hold precious in the mortal realm. He has no allies, although from time to time he pretends to work with various deities in order to ensure their eventual downfall. The Prince of Lies particularly hates Mystra and her former lover, Kelemvor. He exacted a small measure of vengeance against them by engineering the rift that forever sundered their mortal bond of love. However, Cyric now views Bane as the greatest threat to his power, and the brewing war between these two lords of evil may eventually consume Faerûn in a great holocaust.

Clerics of the Dark Sun pledge to spread strife and work murder everywhere to make folk fear and believe in Cyric. They support rulers with a taste for cruelty and empire-building but indulge in intrigue in every land. They avoid plunging realms into widespread war, which would pay honor only to Tempus the war deity. At least, this is the ideal Cyricists pay lip service to. In truth, Cyricists spend most of their time scheming against one another, each striving to strengthen his or her personal power in an endless struggle of cabal against cabal. To make matters worse, during his madness Cyric spoke often to his faithful clergy, but not with one voice. As they all fear him, and each believes what he says is the One True Way, his words set Cyricist temples at cross purposes. His clerics are at one another's throats as often as they are promoting the defeat of other religions.

Cyric's temples are festering sores of evil that vary widely in appearance, reflecting the deity's chaotic nature. Many are hidden within caves or existing structures, including abandoned buildings, crumbling sewers, and forgotten dungeons, from which terrifying screams echo at irregular intervals. Many such complexes once served as temples of Bane, Bhaal, or Myrkul, and thus resemble the grim, foreboding keeps of the Black Lord, the hidden guildhalls of the Lord of Murder, or the tomblike vaults of the Lord of Bones. All have in common a bloody sacrificial altar and a great hall where the local high cleric can rant to the assembled worshipers at irregular intervals.

When not disguising themselves to move in secret among the general populace, clerics of Cyric dress in black or dark purple robes trimmed with silver, with or without hoods. They wear silver bracers or bracelets (usually stamped with the skull-and-sunburst symbol of Cyric) to symbolize the church's enslavement to Cyric. Some clerics paint the symbol of their deity on their cheeks or foreheads on high holy days.

The Prince of Lies recognizes no single pontiff who rules over the entire faith, although a dozen or more powerful clerics believe that Cyric intends them to achieve such a role. Such conflicts stem from the time when the Dark Sun in his madness deliberately pitted his faithful against one another. Although the Prince of Lies has ceased doing so overtly, schisms within the faith have by no means healed, and the chaotic nature of his followers makes it unlikely they ever will. Clerics of Cyric dominate most factions, although powerful sorcerers, wizards, barbarians, fighters, rangers, and blackguards play important roles as well.

Currently the two most powerful factions are found in Amn. Watchful Skull Tynnos Argrim is high cleric of the Mountain of Skulls in the Cloud Peaks and founder of the devout order of assassins known as the Flames of the Dark Sun. He has consolidated his influence over the Dark Redoubt, a temple in the Tejarn Hills once led by a rival sect, and allied himself with the armies of Amn against the Sythillisian Empire. Blackwill Haarken Akhmelere, high cleric of the Twin Towers of the Eternal Eclipse, is working with the army of monsters led by two ogre magi from the city of Muraan and now maintains a stranglehold over trade passing along the Trade Way. A third faction, growing in strength, wars with the clergy of Bane in Darkhold for control of the western branch of the Zhentarim. The leader of this faction is at present unknown. Some believe a charismatic cleric named Dag Zoreth has assumed the mantle of leadership, while others claim that a military commander known as the Pereghost commands the loyalty of the Dark Sun's faithful. In any event, it is this faction of Cyricists who are most likely to ignite an open holy war with the church of Bane.

Death to all who oppose Cyric. Bow down before his supreme power, and yield to him the book of those that do not believe in his supremacy. Fear and obey those in authority, but slay those that are weak, of good persuasion, or false prophets. Battle against all clergy of other faiths, for they are false prophets and forces who oppose the One True Way. Bring death to those that oppose Cyric's church or make peace, order, and laws, for only Cyric is the true authority and all other authority must be subverted. Break not into open rebellion, for marching armies move the false deities to action. Fell one foe at a time and keep all folk afraid, uneasy, and in constant strife. Any method or means is justified if it brings about the desired end.