The Black Lord, The Black Hand, Lord of Darkness 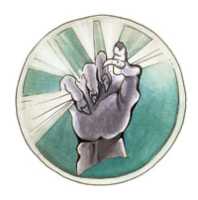 The twisted halls of Zhentil Keep echo with malign invocations chanted in shadowy temples though Faerûn. Bane (bain) the Lord of Darkness, has conquered death itself, returning to the world to give dark inspiration to a thousand intrigues, to foment fear and hatred in civilized lands, and to reassure the common mortal that tyranny, through it may suffer occasional defeat, will never die. Though Bane transcended mortality centuries ago, his primary goal remains notably human -- he seeks nothing short of the total domination of Faerûn. When his servants sit upon the throne of every land, when commoners serve their masters in fear for their very lives, and when altruism and hope have been erased from the world, only then will Bane rest. Until that dark day, however, the Black Hand has eternity to hatch demented plots and vile intrigues. Eventually, he will rule all Faerûn, but there's no hurry. Getting there will be half the fun.

Bane prefers to keep to the shadows, allowing his servants to carry out his intricate plans. On the rare occasion in which he appears, he takes the form of a shadowy humanoid figure -- often bare-chested, sometimes wearing dark armor and a stylish black cloak streaked with red. His right hand, invariably protected by a jeweled metal gauntlet, is all the weapon he needs to dispatch the few foes brave (or foolhardy) enough to attack him. He has no tolerance for failure and seldom thinks twice about submitting even a loyal servant to rigorous tortures to ensure complete obedience to his demanding, regimented doctrine. Though possessed of an unforgiving wrath when aroused, Bane is slow to anger, existing in a perpetual stat of controlled burn.

Bane's tyranny is known throughout the continent, and his is the image most seen as the face of evil. When news of Bane's destruction during the Time of Troubles made its way throughout Faerûn, no fewer then twenty-seven nations declared national festivals of celebration and thanksgiving. The commoner sees Bane's clerics as petty would-be dictators unafraid to use immoral tactics and unthinkable violence to spread their influence and agenda. The adventurer sees the clergy as constant interlopers and enemies, agents of rigid, evil philosophy who side with monsters, devils, and savage humanoids to further their wicked ends. Canny nobles glimpse the truest threat, that some of their peers pay homage to the Black Lord to gain through guile and subterfuge what soldiers cannot conquer by force.

Clerics of Bane pray for spells at midnight. Their religion recognizes no official holidays, though servants give thanks to the Black Hand before and after major battles or before a particularly important act of subterfuge. Senior clerics often declare holy days at a moment's notice, usually claiming to act upon divine inspiration granted to them in dreams. Rites include drumming, chanting, and the sacrifice of intelligent beings, usually upon an altar of blck basalt or obsidian. Of late, clerics of Cyric have become a preferred sacrifice, though old favorites such as paladins, unicorns, children, and celestials remain popular with traditionalists. Clerics of Bane most commonly multiclass in fighters, monks, blackguards, or dreadmasters. Those associated with the Cult of the Dragon often multiclass as wearers of Purple.

Bane orders his clerics and followers to achieve positions of power within their society, either through force or trickery, and to use that power to further the cause of hate, fear, destruction, and strife. The Black Hand much prefers that his clerics subvert governments and carry out their agendas under the cover of the rule of law, but he tolerates a limited amount of discord and debauchery. Torture, beatings, and calculated assassinations frequently come into play in such operations, and rare indeed is the initiate of the Lord of Darkness who does not possess at least rudimentary skill in such enterprises. The church operates under a strict hierarchy--questioning or disobeying the orders of a superior is an insult to Banes' supremacy, and is punishable by torture, disfigurement, or death.

Before the Time of Troubles, Bane's church was riven by internecine strife, divided into the Orthodox sect (commanded primarily by clerics) and the Transformed church (dominated by wizards). Bane himself encouraged this struggle, appreciating the value of dissention even when applied to his own servants. His long dormancy seems to have cleared his mind on this matter, however, as he has acted personally to eradicate these divisions, even going so far as to name Fzoul Chembryl, the ruler of Zhentil Keep, as his personal Chosen Tyrant and infallible mortal representative. The formerly fractious Banites have made common cause in vicious pogroms against those clerics who turned to Cyric after Bane's "death" and who have not returned to the fold; their increased cooperation can only lead to foul tidings for the rest of Faerûn.

History and Relations with other deities

Even as a human, Bane wanted nothing more than to become the most feared, respected tyrant the world had ever known. However, doing so would require an infusion of arcane power greater than that usually accorded to mortals. Hence, the calculating despot joined forces with the similarly driven humans Bhaal and Myrkul in a pact of mutual assistance that would end in the apotheosis of the entire trio. The three villains adventured across the breadth of Faerûn, defeated countless foes, slew one of the Seven Lost Gods, and traveled throughout the Lower Planes before achieving that goal. They benefited from the generosity (or, as some suggest, indifference) of the dispassionate Jergal, who had become bored with his role as patron of strife, death, and the dead. Each gained one-third of Jergal's portfolio and dominated their area of concern for centuries.

However, even complete control over strife was not enough for Bane, whose desire for supremacy led him, in 1358 DR, to once again team with Myrkul. The pair stole the Tablets of Fate, inscribed by Lord Ao to outline the roles of the deities of Toril. This precipitated the calamitous Time of Troubles, during which Bane was slain by Torm the True in a furious battle in the harbor of Tantras. It seemed the Black Lord's ceaseless ambition had at last led to his destruction. Bane's church fragmented, with most of the faithful defecting to the clergies of Cyric, who inherited Bane's portfolios, and Iyachtu Xvim, the progeny of Bane's coupling with a powerful demon. Agents of weal and freedom breathed easier in those days, knowing the Toril was rid of perhaps its greatest menace.

Those who let down their guard, however, did so rashly, and far too soon. On midwinter night of 1372 DR, Xvim burst in a conflagration of diabolical green light. From the smoking husk of his remains emerged a newly reinvigorated Bane, his right hand ablaze with green fire. Xvim, it appeared, had been little more than a sentient cocoon, a shell in which grew a festering larva that would, in time, become Bane. Within days, the Xvimlar clergy had converted to the worship of Bane, and a great evil once again cast its calculating stare over the lands of Faerûn.

Bane hates virtually the entire Faerûnian pantheon but holds special antipathy for Torm, Cyric, Mystra, Tempus, Helm, Lathander, Oghma, and Ilmater, in that order. He has established a working relationship with Loviatar, Mask, and Talona, but as these deities desperately fear him, the alliances are not strong.

Serve no one but Bane. Fear him always and make others fear him even more than you do. The Black Hand always strikes down those who stand against it in the end. Defy Bane and die -- or in death find loyalty to him, for he shall compel it. Submit to the word of Bane as uttered by his ranking clergy, since true power can only be gained through service to him. Spread the dark fear of Bane. It is the doom of those who do not follow him to let power slip through their hands. Those who cross the Black Hand meet their dooms earlier and more harshly than those who worship other deities.